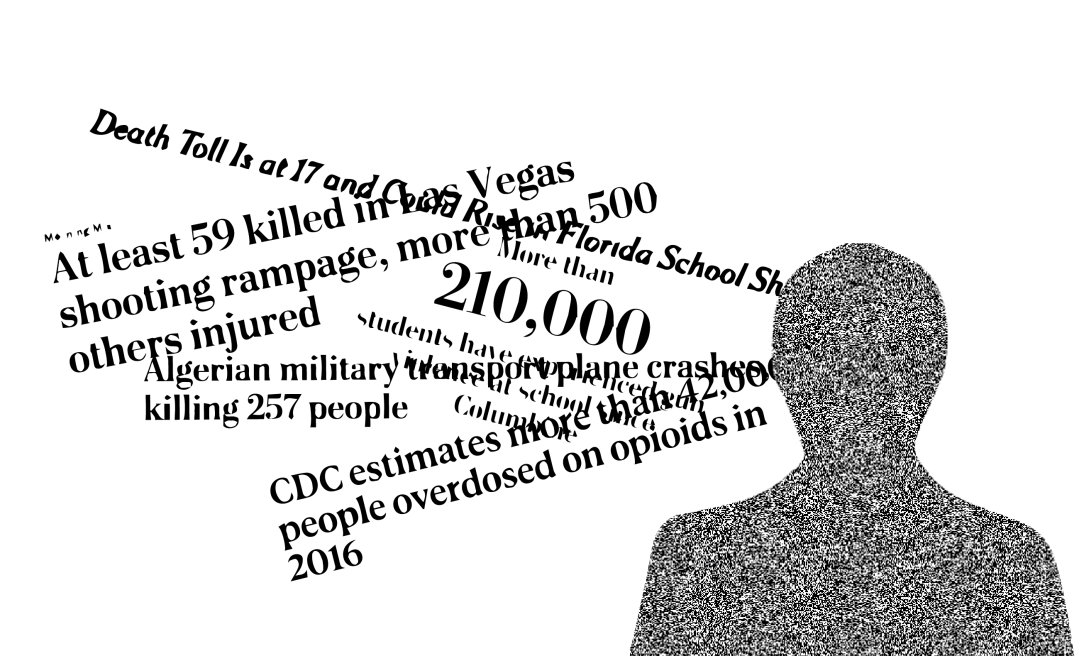 A threshold to empathy

The psychological phenomenon behind apathy in the face of tragedy

Over a breakfast of toast and orange juice, a scan at news headlines provides a glimpse into the current state of affairs. Deaths due to the national opioid crisis are at an all time high. Another bite of toast. A school shooting results in 17 victims so far. A sip of orange juice. Syria enters its eighth year of civil war. Put the dishes in the sink, pack a lunch and leave for school — off to stress about the chemistry test in first period or the ever-growing pile of laundry desperately in need of folding.

These immediate issues take center stage, while the tragedies that appear in the news again and again fade into the background.

This occurrence is one that senior Kristy Maanavi has observed in students at MVHS, particularly after the Las Vegas shooting that occurred on Oct. 1, 2017. Resulting in 58 dead and 851 injured, it has been called one of the deadliest mass shootings in modern U.S. history. And yet, Maanavi noticed a subdued response following the event.

“[At MVHS], there was a brief moment of silence, but other than that, I only had one class that actually talked about the shooting,” Maanavi said. “We just treated it like another event that happened and moved past it. We never really took the time to talk about it or discuss it, and I feel like that added to the desensitization of school shootings — the way we treated it as very normal and matter of fact, like ‘This happens.’ Which we shouldn’t have.”

According to psychologist and professor Paul Slovic, these responses — or lack thereof — are borne out of a psychological phenomenon called psychic numbing. When the number of people affected increases, the ability for humans to empathize decreases.

“The way we value things as the amounts increase does not go in a straight line,” Slovic said. “It goes up very steeply at the beginning and then it kind of flattens out. That means there’s a curve where by the time you get to 87, 88 isn’t much different.”

Slovic attributes this to a fast, intuitive way of thinking that comes instinctively, rather than looking at it from a more logical or analytical perspective.

“Most of the time, we think in the fast, intuitive way because it’s with our feelings — it’s easier, it feels right and we tend to go with our gut feelings rather than thinking more carefully,” Slovic said. “If you think more carefully, the difference between 87 and 88 is one life — one can recognize that and it’s important. But if you’re just going on how you feel about it, you won’t feel any different with 87 or 88, and that’s the desensitization that’s central to psychic numbing.”

When dealing with numbers on a smaller scale, changes to that number seemingly have a larger impact, but as the numbers increase, human perception of these changes seem inconsequential in comparison. Similarly, in the wake of tragedies, humans have difficulty grasping the reality and extent of the situation. Due to this difficulty conceptualizing large numbers — and this effect only intensifies as the numbers escalate, humans become increasingly numb to the events of mass atrocities.

But when humans are presented with individual stories and can humanize the numbers, the response changes drastically.

Senior Juliane Tsai took notice of this phenomenon as well, especially while organizing the Never Again vigil, which was held at MVHS on March 14 to commemorate the victims of the school shooting in Parkland, Fla.

“I think Monta Vista kids — we’re all just super busy,” Tsai said. “Sometimes it’s hard to keep up with things that are going on outside of our academics and extracurriculars.”

For Tsai, this was one of the main motivations behind holding the vigil, where Tsai also delivered a speech telling the stories of the 17 victims. In addition, pictures and information about the victims were hung up around the school in remembrance.

“We wanted to do it because it’s really easy to relate [to],” Tsai said. “It could have been our school. A lot of the victims were around our age — 18, 17. I think definitely after understanding the victims’ stories, what their dreams were and how their right of pursuing their dreams was taken away from them, it’s a lot more impactful than just seeing the statistics of how many people died.”

Seeing footage from the shooting itself sparked a similar emotional response for Maanavi.

“There’s a video of [Parkland students] that you can see from helicopters flying over the school,” Maanavi said. “You see them walking out single file. That [image] was stuck in my head a lot — the fact that there were so many kids in there, and they were so scared for their lives.

This effect has been observed in a study conducted by Slovic, alongside researchers Daniel Västfjälla, Arvid Erlandssonc and Robin Gregory. A photo posted on social media pictured the body of a young Syrian boy, Aylan Kurdi, on a Turkish beach in the midst of the Syrian refugee crisis. The study examined the effects of this photo, as it was viewed by 20 million people and became a well-known image to reflect the conditions in Syria.

Researchers collected data from Google Trends to compare how often the terms “Syria,” “refugees” and “Aylan” were searched after the image was released. The searching frequency of these words started to increase on Sept. 2, 2015, the day the photo was posted, came to a peak on Sept. 4 and gradually tapered off near the end of September. This sharp increase demonstrates how the image of Kurdi, which reflected the direct effects of Syria’s civil war on an individual, drew attention to the crisis in a way that the numbers couldn’t and didn’t.

Additionally, the researchers also collected data from the Red Cross regarding a donation drive the organization held for Syrian refugees. The week after the photo of Kurdi was published, average donations to the drive increased by 55 times in comparison to the previous week. These donations show that the image not only sparked notice but resulted in a strong emotional effect that resonated with people, garnering empathy and eliciting action.

Maanavi comments that she noticed a similar effect with the events in Parkland as well. The Parkland students have emphatically expressed their opinions and experiences on social media, as well as the news channels that visit their school, both of which provide wide-reaching platforms.

“They voice their opinions so vocally and so often, in such a raw and honest way,” Maanavi said. “They use those effectively to promote their movement and this idea of change  — give hope that there’s this possibility that we can spark change.”

Maanavi was involved with organizing the 17-minute walkout for gun control at MVHS, which occurred on March 14, and feels that the Parkland students’ vocal activism is a main contributing factor in sparking action within the community.

“By directly attacking [the issue] so publically in a way that’s never been done before, they’ve forced us to reanalyze ourselves and the way we’re thinking about shootings,” Maanavi said. “They pointed out the fact that we’re saying stuff like ‘thoughts and prayers’ but not doing anything about them, so they’ve helped us break away from the desensitization of school shootings.”

The culmination of researchers’ work provides a full picture of psychic numbing: humans are desensitized to large numbers of victims but react most strongly to individual lives and stories. Though humans may not be able to completely eliminate the psychic numbing response, awareness of the phenomenon is the first step to being able to catch emotional numbness and attempt to overcome it.

Tsai believes that the Never Again vigil provided an opportunity for MVHS to recognize the issue in themselves.

“We just have to take time out of our day to remember the victims in Parkland, not just sweep it under the rug and keep going about normal life,” Tsai said. “I think the vigil really allowed [MVHS] to take some time to think about the situation, how severe it really is and be motivated to do something about it.”

After becoming aware of and educating others about psychic numbing, Slovic raises multiple courses of action. For example, Slovic suggests supporting Congress members who are in support of legislation to address issues, such as aiding Rohingya people in Myanmar. Another option is to contribute with either time or money to organizations that have, to an extent, overcome psychic numbing.

“Give [these organizations] support and that will multiply your own effort,” Slovic said. “There’s only so much we can do as individuals, but if we join with groups of dedicated people, I think we can have even more impact.”

Slovic also touches on the idea that these mass atrocities and issues may seem impossible to conquer, by explaining a phenomenon called pseudoinefficacy, one aspect of the arithmetic of compassion. With this false sense of inefficacy, people may not be as motivated to help others if they know that they’re not helping everyone in need.

“What we point out is that that’s not rational,” Slovic said. “That’s not logical. Even partial solutions save whole lives. So again, we have to work to not let it happen to us. Just because we can’t solve the big problems doesn’t mean that what we do, even if it’s a small part, isn’t meaningful.”

Continual awareness of psychic numbing is key to recognizing and actively combating its effects.

“Feelings can’t add, can’t multiply,” Slovic said. “It breaks down when you’re thinking about statistics, so we just have to recognize — when there’s numbers, when there’s a lot of people and we don’t know them personally, when they’re of a different culture or religion and maybe living far away — that unless we think carefully, we may not appreciate their humanity and their importance. But they are important. We just have to think carefully to recognize that, understand that and not let this inhibit us from doing things that we need to do in the world.”

View all posts by Charlotte Chui