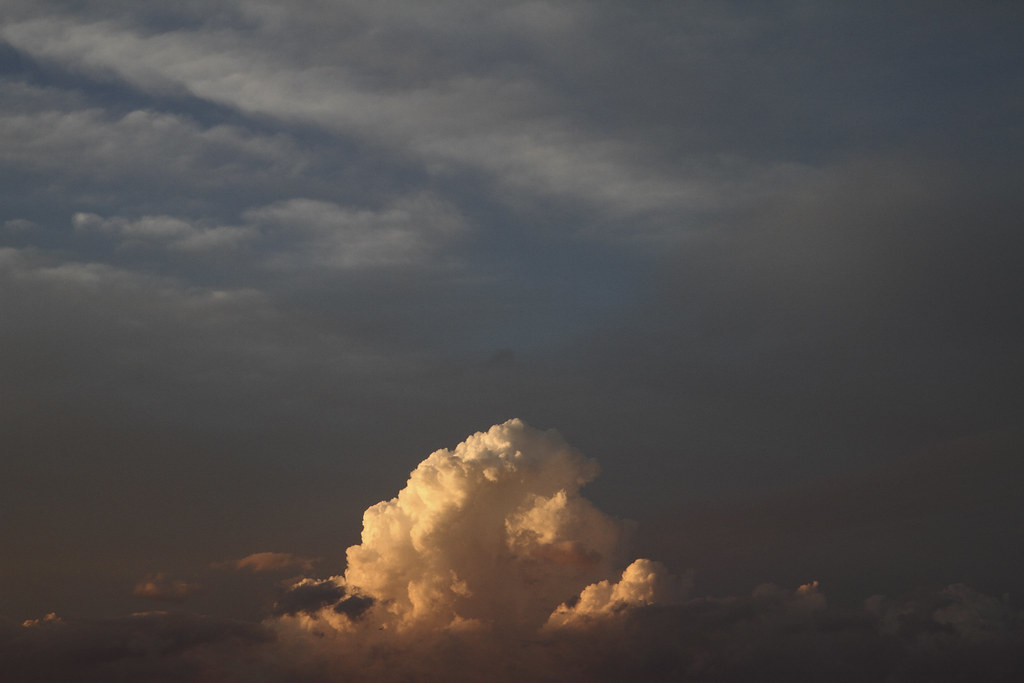 “Mushroom Cloud” by Threthny is licensed under CC BY-NC-SA 2.0

In all of human history, nuclear weapons have only been used twice, in Hiroshima and Nagasaki. We must never forget the devastation they wreak.

The nuke whistles towards the city, the buildings sharpening into focus, fragile, brittle.

Far, far below, a little boy with his mother. He is imagining that the city is made out of candy and that he is a little gingerbread boy. The buildings are folds of licorice, set with sugar window panes, polished so the sun gleams blindingly off of them. His candy cane shoes trot on a street made out of peanut brittle. He sighs; a whole city made out of candy.

To the missile above, the city is candy; the metal as soft as licorice, the windows as fragile as thin sheets of sugar. It can punch straight through the sidewalk, kneading its way into the soft center of the earth like a child chewing on a toffee. It speeds its way towards the very center of the city, an arrow of plague loosed by a vengeful god.

And the god is mortal, nothing more than a woman who finally opened a small black briefcase. Her advisors had deliberated and debated until finally, they offered up to her that black leather briefcase and silence fell upon the room. And then there were papers and maps and frantic discussions, fingers jabbing the wooden table until they receded, sore and offended, until they settled on that sugar-spun city.

And as the boy is walking, he sees something in the sky, a black dot of chocolate, a Hershey’s Kiss thrown far into the sky, falling, dropping towards them. The gingerbread people scatter, scrambling for the sugar high-rises.

Then, there is a sharp buzz on his mother’s phone and she looks, gasps, drags him by the wrist into a building.

The city is candy no more. It is buzzing life and sharp metal, elbows and waists, struggling to the basement. The boy doesn’t know what’s going on. He’s scared but he’s afraid to cry. All around him, a sea of desperate faces work their relentless way towards the safety of the cement underground.

The nuke rushes over the top of a tree. Leaves whisper.

The boy is sitting in the dark basement, hearing the breath of the people around him. They are breathing as one, in quick, frantic gasps. It’s cold; he shivers, feeling the ice cube wall behind his back, chill leeching through his striped shirt orange and white shirt. Like a giraffe, he thinks detachedly.

His mother’s fingers grip his knuckles, kneading them like rosary beads, bruising them in her desperate, helpless silence.

Suddenly, the boy can see every color in the room, the stripes of fear in his mother’s knuckles and the edges of her eyes glowing blinding white like an angel and then he cannot see anything. He is thrown against her, his thin shoulder blade sharpened to a deadly weapon, slamming her against the concrete. And then his knee flies up, he collapses, head arching gracefully back like a ballerina, against something that he feels is her collarbone.

He wails, a thin shrill thing lost in the hundreds of cries as heat washes over the room, his back blistering, his skin burning to a crisp. He claws at the floor, struggling to stand up, scrabbling away from the oppressive heat of his mother’s body, does not understand why she is holding onto him, burning him.

Dimly, somewhere in the back of his mind, he wonders why he cannot hear anything. In all the movies, there is a thunderclap of noise, yet he hears nothing. Maybe they forgot it, he thinks. He almost starts to giggle at the thought of those scientists forgetting about something so simple as noise and then his fingers slam unbidden against the burning concrete, sharply numb.

He lies against her, the bony vertebrae of his swan-curved neck digging into her ribcage and the edge of his ribs against her hip. They are in pain, discomfort from their closeness yet she grips him with her white-edged fingers because if he stands up, he will simply be swept away into nothingness.

They feel as though it has been forever, but in reality, it has been nothing more than a few feverish minutes.

And all of a sudden, the boy’s head feels so full of nothing that he has to get out of that basement where his skin is burning off, and he struggles against his mother’s arms — arms that burn his tender, scraped skin. There are twisted yells coming from his throat, almost against his will. And when his mother turns her face down, he recoils.

It is burnt and bruised from where the shock threw her against the cement, crushed her skin against her son’s head, from where that fireball of heat had rushed.

Not even the ice cube underground had saved her. It was not saving them, he knew all of a sudden — it was killing them.

He struggles mutely, away from this bruised thing holding him in her arms, away from this building, all burnt to a crisp. And now his fingernails are clawing at his mother’s arms as she squeezes onto him and tries to sooth him in a singsong voice. He is frightened of remaining here any longer. He feels as though he is suffocating here.

The softer she coos his name, the harder he struggles, until they are practically wrestling and he is scared, terrified, does not understand why they are keeping him here — he just wants to escape from this.

The woman stares at the screen, at the buildings so easily bent and twisted, like gummy fish tormented by small, giggling children. There are fires raging in the city, licking at the burnt ruins and finding them to their taste; the windows are shattered, glass and metal all over the asphalt road.

And where are the people? She cannot see them. Suddenly, she is so afraid that she has killed them all. But they are the enemy, but their governments killed people, she tells herself. Some of them, they were ready to kill us all.

Her fingers tighten around her wadded up napkin, lace and silver lining, crushed beneath her fingers. The camera — is it a drone? — pans towards the center of the city. A general whistles, another general with a red face, scarlet against his salt white hair, medals gleaming on his shirt like a row of bullets.

She does not understand why she is here, why they are keeping her here, she just wants to run away, far away, away from that gaping hole in the very center of that sugar city.

And then the boy finally breaks free, away from this hell, running for that door that will surely lead him back to the candy city from lifetimes ago. And he’s running, running, running free until his shoelace snags in a licorice twist and he stumbles, falls, lands on his elbows, scraped bloody. There is blood on his forearms and blood under his fingernails; he doesn’t remember where it’s from.

He coughs, twisting around to sit up straight and then he gasps, gags. He thought he was running away from hell; this is hell: twisted spires, burnt, shattered glass. He can see the people lying broken on the ground and in his mind, in his fear they are candy, they are fake people, they cannot be real. This cannot be how peoples’ lives end.

He doesn’t want to be in this world and in his mind, it is not a world — it is candy. A candy world that he will never, ever forget, in all his life.

He wants to go back to that world that he used to be in.

His orange-white shirt is tattered. Not like a giraffe, he remembers, giraffes are yellow with brown spots. What is it then? It’s nothing.

It cannot protect him and he is nothing but a tiny black dot.

From the camera, the woman can see black dots crawling around that hole in the ground. Some part of her wants to gag, scream, and run. But she cannot. She is not weak, she’s a leader; she cannot afford to seem weak. And if she screams, they will never see her in the same way. If she screams, she will be nothing. And she is strong, and the war needed to end. Otherwise, it would have swallowed up everything in the world, sucked it all in.

She can feel the eyes of every tomato-red general in the room and she takes the pieces of her that are cringing in horror and she sucks them away and stands up straight. Somehow, some part of her manages a smile.

Somewhere far away from them, candy is burning, shriveling up into wisps of black.

View all posts by Sophie Wang