A “Flawless” State of Mind: Impacts of Various Factors on Productivity

The role of stress, environment, and encouragement on our productivity

By Amy Zheng and Avani Durve

As students, tackling a variety of commitments and trying to maintain mental and emotional health, being productive is essential; however, that is easier said than done. A multitude of factors impact productivity and the optimal conditions for remaining productive are different for everybody. Still, some factors such as stress and encouragement are universal to productivity; while factors such as time of day can be optimized by self-reflection.

According to the Mayo Clinic, “Stressful” situations create disruptions in a natural balance of hormones in the body, which the body tries to fix to maintain homeostasis. This stress response includes the rapid autonomic nervous system (ANS) releasing noradrenaline. Noradrenaline is linked to the “flight or fight” response, which is known to affect the function of the learning and memory portions of the brain. 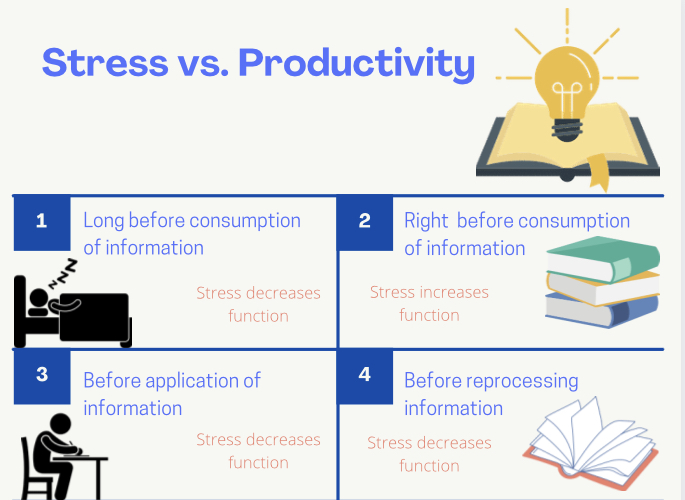 Junior Akanksha Varanasi models this in explaining what she noticed about how she works at different times in the timeline of her activities or projects. “Usually right before an important deadline, if I am stressed, I am going to be working to meet that deadline,” Varanasi said.

The nature of material that is being absorbed and what the stress is about plays a role in the retention of the learning material as well. If the material has a high emotional connection to stress or is of high importance, retention usually increases.

“If I am stressed about doing something, then I will probably put it off until the last minute and then grind it out and focus on it,” Varanasi said.

As MVHS students, these moments of stress can hit close to home. Whether it be an essay due in two days or three tests in a row on Wednesdays, stressful situations are inevitable for most of us on campus. However, despite the various stress factors that students may face, there are also a variety of ways to increase cognitive functions, one of them being encouragement.

According to his book Social Intelligence: The New Science of Human Relationships, Daniel Goleman details the intricate workings between our brain and the environment, one case being the effect of encouragement on cognition.

Goleman explains that, when faced with an increasing amount of negativity, our prefrontal cortex is dismissed to allow the amygdala to take over in order to prepare the body for an upcoming crisis. The prefrontal cortex is a crucial part of brain function, serving as a controller for many of our main cognitive control functions – prospective memory, cognitive flexibility, and processing speed.

School-based therapist Richard Prinz notes the importance of how the encouragement of oneself can impact an individual as well.

“Encouragement is more about the process and the person’s strength and talents and abilities rather than just the end result,” Prinz  said. “Encouraging oneself is really important, not just waiting for it to come from the outside, [like] from teachers or parents, but to encourage yourself in the face of difficulties builds resilience.”

To sit down with study materials at the break of dawn or stay up studying with the aid of a single light? Time also affects productivity, and the preferred times of study throughout the MV student population are varied throughout the day. Sophomore Crystal Cheng usually does her work later in the night, as she describes feeling tired in the mornings.

“I think I work best at night because in the mornings I’m usually really tired and unable to concentrate,” Cheng said. “[However] that might also be an effect of working late at night.”

On the other hand, Varanasi prefers to study earlier in the morning. “If I wake up early, then my brain is fresh and I can focus more,” Varanasi said.

Some students at MVHS prefer a night owl’s ambiance, whereas others take flight as an early bird. Why is it that these times of studying are so spaced out? What is the underlying cause, the science, behind these contrasting study habits?

An explanation can be provided through decades of research on the circadian system in humans, a 24-hour cycle that resets daily to sustain a balance between internal and external environments. A 2017 study by researchers Jeffrey C. Hall, Michael Rosbash, and Michael W. Young won the Nobel Prize for detailing the microscopic features of what is often known as “biological clocks.” The study found that circadian rhythms affect cell cycles, sleep schedules, and brain function, among many others.

Each person has their own internal “biological clock,” so the times that people prefer to study are entirely up to them. It ultimately comes down to routine and personal preference to help shape that schedule.

In our world today, it has become much harder to focus and be productive, given the amount of technology that is available at our fingertips. Whether it be the time of day that we study or the words of encouragement that we receive, being able to accomplish the work that we set out to do becomes much easier with productive habits that we implement into our daily lives.

View all posts by Avani Durve